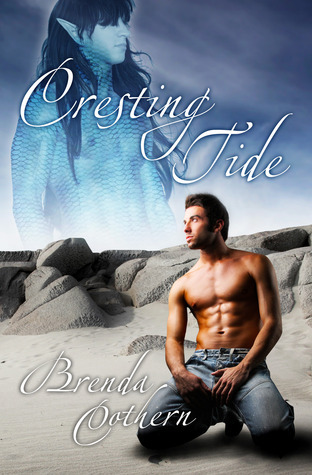 Peter, fleeing from an arranged marriage to a woman, stows away aboard a merchant ship only to be discovered and pitched into the sea. Floating upon the current and awaiting death, he is rescued by a mythical sea elf.

Cuke knew his curiosity with humans would only lead him to trouble but he never expected it would lead him to love. A love filled with complications as he is bound to his watery home.

Can the couple overcome the restrictions of their races and be the fathers to their unexpected child or are they destined to be torn apart by their different worlds?

Author Note:
Contains m/m and hermaphrodite sexual practices and is intended for readers of legal age in the country in which they reside.

My thoughts: I really enjoyed this particular story. I wish it had been a lot longer, or even sort of ended in such a way that we knew what happened to Cuke after [highlight for spoiler]he left his new family during the storm[/highlight]. I really hope the author will continue this with a follow-up story of some sort – either a sequel or a short novella thingy. SOMETHING. Ughhh

As of right now there is no sequel but I’ll make sure to be on the lookout for it.

What a great romance! I have read this short a least a dozen or more times in the span of time since I’ve purchased it.

This story was based off the disney version of The Little Mermaid, and it’s cute. You can’t help but love it if you like anything relating to or even slightly hinting to that fairytale. These merfolk are hermaphroditic and can’t speak the human tongue, but boy are they interesting and the eventual trust, romance, and family building between our two heroes makes for one delightful read!

My one and only serious problem with this book was that it was TOO SHORT. The ending was well done, and I don’t have a problem with it… but I need a sequel. I need something else to help me deal with the events that happened in those last few pages of tragedy.

It would have been 5 if it wasn’t so frickin short!!